Golf in its current form has been around since the 15th century, the origins of which are traced to Scotland. Through the centuries it has seen a lot of changes including a ban by the Scottish Parliament in 1457 because it was interfering with archery practice which was a cause of concern for the nation's defence! (source: IGF) Thankfully the ban was lifted in 1500 and by 1552 the Old Course at St Andrew's, Scotland, was opened to residents of the area.

Golf was played at the Olympic Games in Paris in 1900 and both men and women took part. The winners of both categories were from the USA, namely Charles Sands and Margaret Abbot, who was the first American woman to come first at an olympic games tournament.

The last time it was played at the olympics was the 1904 Missouri Olympics Games. Fast forward 112 years and it will be a part of the 2016 Olympic Games, Rio de Janeiro, with at least 30 countries being represented.

History of golf in Ireland

The first of Ireland's golf clubs were founded in the 1880's, one of which is Lahinch golf club which we visit during our golf cruise (see photo left circa early 1900's). In 1910 the Irish Golfer's Guide was published and by 1911 the Irish Professional Golfers' Association was established (infogolfarchive.com).

Ireland has produced some world class golfers from Harry Bradshaw and Fred Daly in the 1930's - '50's era right up to today's greats: Darren Clarke, Grahame McDowell, Padraig Harrington and of course Rory McIllroy, to name but a few!

What better way to play golf in Ireland than to combine it with a luxury barge cruise on board the Shannon Princess. During the 6 day break, we visit 4 world class golf courses: 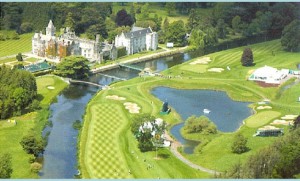 Starting the morning with a scrumptious breakfast, we will then transport you by luxury coach to the golf course. With an average transfer time of 1 hour, it wont be long before you will be playing a round of golf.

Set among the back drop of lush Irish countryside and scenery, you will play on some of the finest golf courses in Europe.

No doubt all that fresh air will have created an appetite and in the evening you can sit back on board the barge and relax while we present you with a 7-course gourmet dinner.

With an array of elegant dishes, our foods are freshly sourced, free range and organic. We will cater to your dietary needs and can offer low fat, healthy eating options. If you still have energy after all of this, perhaps a visit to one of the local bars onshore for a bit of Irish craic and banter will finish the day in true style! Contact us at Shannon Princess for further information.

Discover Our World
Receive Our Newsletter